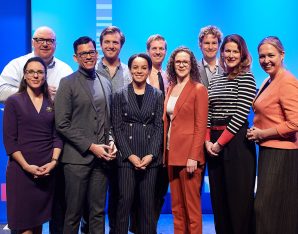 1. Sophie in ’t Veld
Our European leader Sophie in ’t Veld is for the past 15 years a staunch fighter against populism and stands for the rule of law in Europe. She is now running to succeed Guy Verhofstadt as leader of the ALDE group.

2. Raoul Boucke
Raoul Boucke is born & raised in the east of Suriname. He became a successful diplomat at the EU representation of the Dutch kingdom. Passionate about the environment, Boucke will employ his vast experience to make Europe the beacon of green energy and a climate frontrunner.

3. Samira Rafaela
Samira Rafaela is the great-granddaughter of the first novelist to write in Papiamentu and daughter of a Jewish mother. She could be the first MEP of Dutch Caribbean descent. She has the support of not just D66, but also the governing MEP party of Aruba. As project leader at the National Police, Samira Rafaela knows a thing or two about security, and the need for EU countries to team up against organised crime and foreign interference.

4. Felix Klos
Felix Klos is 27 years old and he could become the youngest Dutchman ever to serve in the European Parliament! This piano-playing football-junkie is also a historian, and enlightened us about Winston Churchill’s love for Europe.

5. Emily van de Vijver
As an entrepreneur with vast international experience, Emily van de Vijver has the perfect resume to represent Europeans from all walks of life who want the EU to better serve the ideal of prosperity for all. Emily will hit the Brussels ground running!

25. Jan Terlouw
Our slate is completed by candidate no.50, the inspiring former vice prime minister, children’s book writer, physicist and D66 party leader who became a leading voice in pushing green policies in the Netherlands and abroad: Jan Terlouw!